Not to be confused with Budapest–believe me, the mix-up is more common than you’d think–Bucharest is the capital and largest city in Romania and an absolute dream for people who love architecture and history. My friend Rosalie and I arrived in the city from Luxembourg ready to take on the sights and sounds of Eastern Europe.

We only had one full (and very hot) day in Bucharest, but we made the most of it. Here’s how you can do the same:

Start with a free walking tour.

In almost every big city I start my itinerary with a free walking tour. It helps me get my bearings, understand some basic history and culture, and connect with a local who can answer my questions about strange things I’ve already noticed. The Walkabout Free Walking Tour was one of the better ones I’ve been on, and that’s impressive considering I’ve taken probably 50 of these tours in my lifetime. Our guide covered both distant and recent history in both the Bucharest area and Romania in general, from the 15th century rule of “Vlad The Impaler” to the dictatorship of Nicolae Ceausescu from 1965-1989.

Other highlights included wandering by St. Anthony’s Church (where single girls apparently pray for an end to their loneliness), the Parliament building (the largest administrative building in the world! Ceausescu was obsessed with having the biggest everything), and “the ugliest statue in Romania” (real name: Statue of Trajan and the She-Wolf). 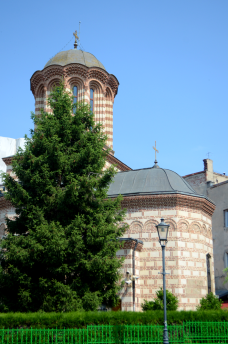 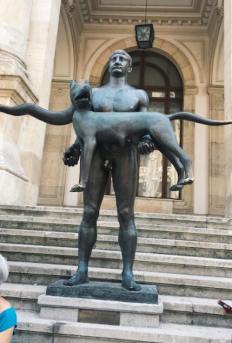 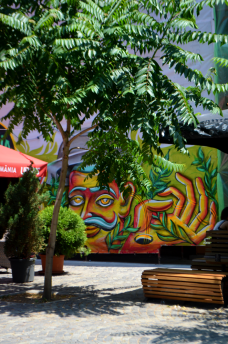 If you do the free walking tour you’ll stop here for a few minutes, but it was so lovely that I wanted to feature it separately. The interior of the chapel is dark but painted beautifully, but the real gem is the courtyard that surrounds it! It’s filled with gorgeous red flowers, shade-providing trees, and intricate and stunning arches. 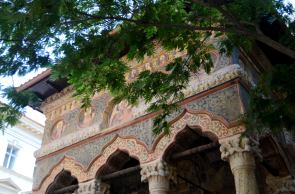 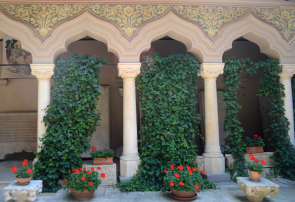 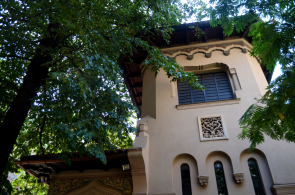 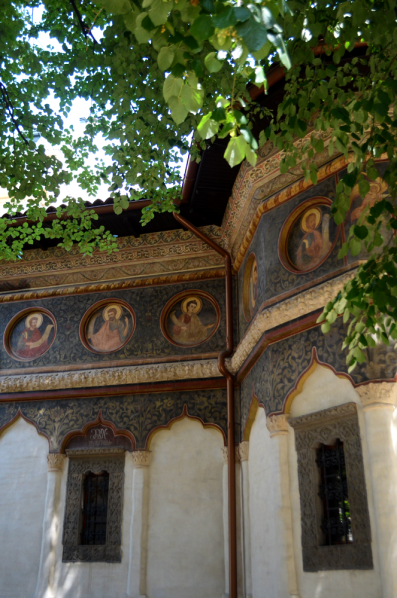 Look up at all the breathtaking architecture.

I’m guilty of having an iPhone Camera Roll that’s 90% pictures of beautiful buildings. The architecture was absolutely my favorite part of Bucharest, and if you love strolling through streets admiring the edifices looming over you then you’ll love this city too. 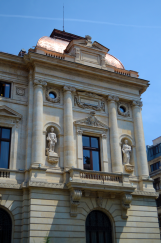 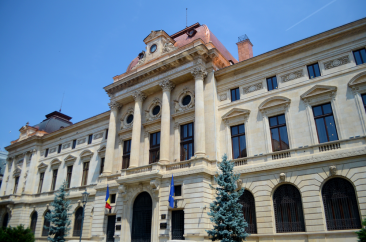 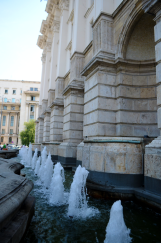 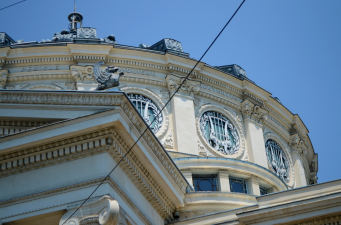 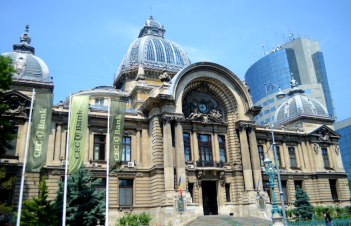 Grab lunch and a book (or two).

Carturesti Carusel (also called the Carousel of Light) is a bookstore in the heart of the Old Town pedestrian area in a beautiful 19th century building. Their bistro on the top floor has good, reasonably priced lunch options and the best view of the rest of the store. 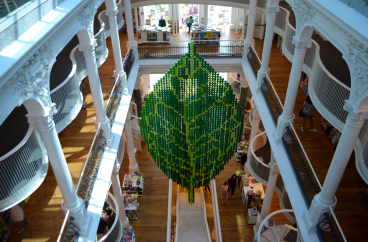 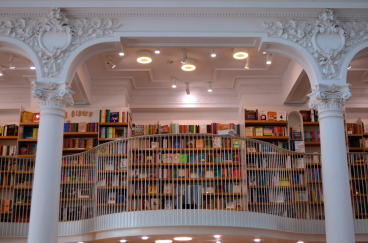 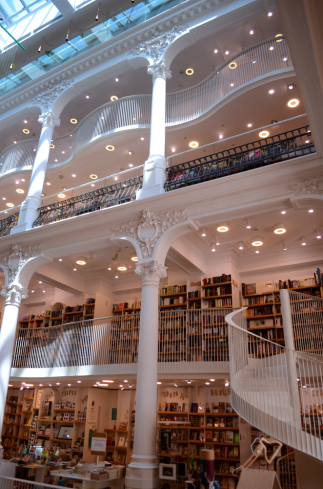 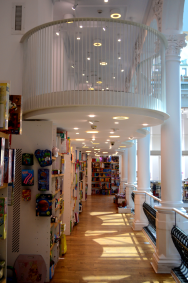 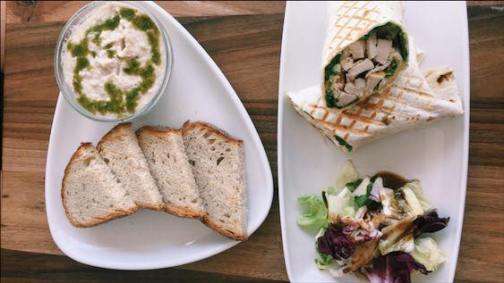 Feel the music at the Romanian Athenaeum.

Rosalie is a huge music nerd, so she wanted to check out this concert hall in the center of the city that is known for having a stunning interior. I don’t care much about music, but I agreed to go along and see what it was all about. When we arrived, the guard told us that there was an “audition” happening (which might have been a poor translation of “rehearsal” given how laid back the musicians seemed onstage) so we’d have to be quiet. 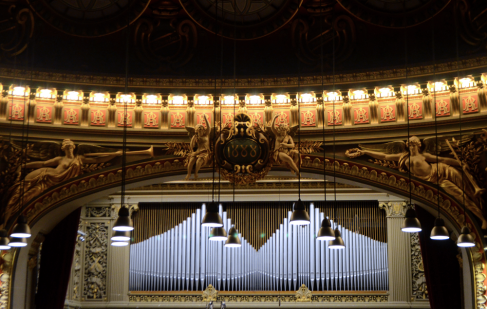 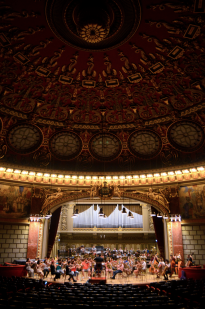 We sat in silence for a half hour, just listening to the orchestra play intermittently and letting our eyes wander around the gorgeous concert hall. From the wall murals to the ceiling carvings, I didn’t want to ever leave the space. I can’t recommend it enough, especially if you’re lucky enough to experience the music along with it or if you get tickets to see an actual symphony or chamber concert here. 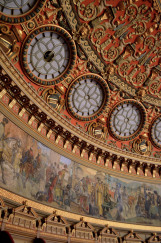 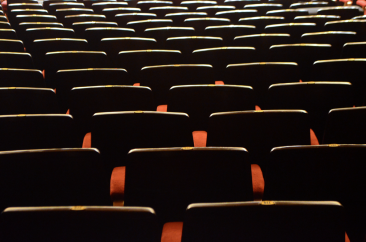 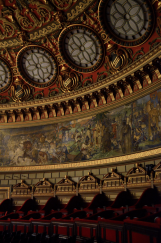 After our musical eavesdropping, we wandered the rest of the building, which is equally stunning. We accidentally strolled into areas that we weren’t supposed to (whoops) and got yelled at by the guard, but it was worth the photo opps. 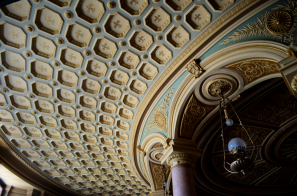 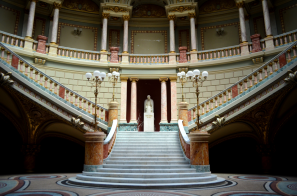 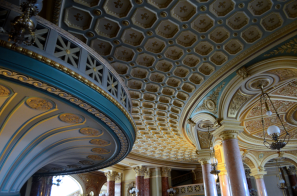 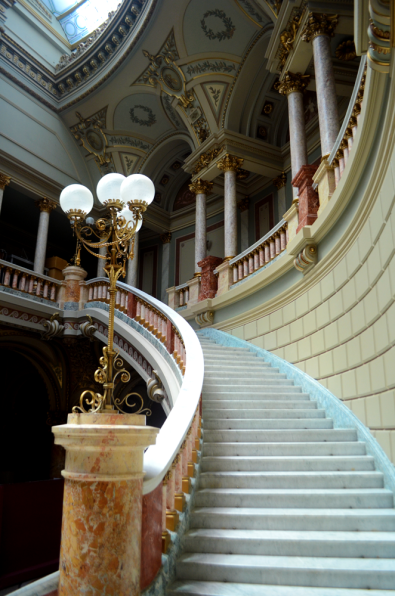 Come to think of it, the whole city was worth its photo opps–the bustling energy, cheap prices, and yummy street food were just plusses to a place that was already lovely.