Herceg Novi, once the hottest spot to vacation in Yugoslavia, is now a relatively sleepy coastal town in Montenegro now overshadowed by far by Kotor and Budva to the south. Supposedly Herceg Novi is a busy place in the summer, but it didn’t maintain that same energy into October.

Still, Herceg Novi is a wonderful place to spend a day or two exploring and relaxing without the intense party atmosphere that the Montenegrin coast has developed in recent years. Here’s the best way to visit Herceg Novi:

Enjoy the view from your hillside apartment

While Herceg Novi is fairly budget-friendly, it’s the only town I’ve visited on this trip that doesn’t have a single hostel. Instead, you’ll find apartment rentals that range from cheap studios (I stayed in one that was 20 euros per night for a studio with a queen bed, daybed/couch, kitchen, bathroom, and small shared balcony) to large fancy places with hot tubs and swimming pools. In most cases, the more expensive, the better the view, but even our cheap place had a nice lookout over the snowcapped mountains and tranquil Bay of Kotor. 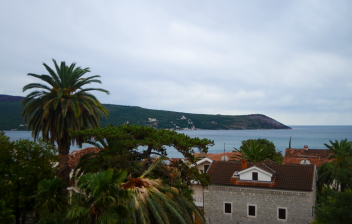 Like all European cities and towns no matter the size, the Old Town area is the center of activity. In October, Herceg Novi’s Old Town was pretty dead, but you can still enjoy the bakeries, wander the fresh produce market, and stop into the little Orthodox church.

I also recommend popping into “probably the world’s smallest bookstore” (it was astonishingly small–only about twice the size of my closet at home and fits no more than three unmoving people in it at one time). The owner speaks decent English, so feel free to chat a bit about your trip and he’ll offer you a few English selections related to the Balkans. My travel buddy ended up buying a poorly translated but relatively interesting collection of Balkan legends, and we loved poring over the traditional tales of how certain mountains came to be or how goddesses named various cities.

Climb up to Savina Monastery

Herceg Novi is best known for the Savina Monastery, a 15th century Serbian Orthodox monastery. It has three small churches and two cemeteries, which are nice enough to explore, but it’s the scene from outside and above that really captivates. This sunny October day was perfect for admiring the monastery’s architecture through the trees against the backdrop of the Bay of Kotor. 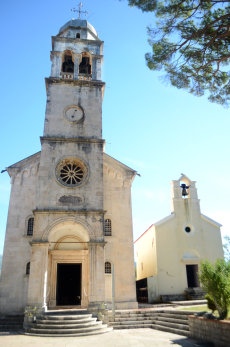 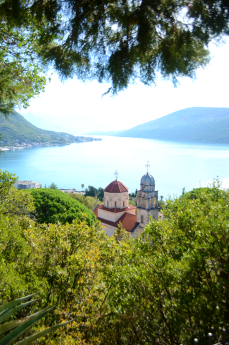 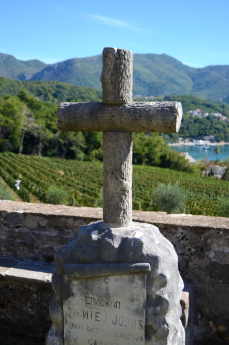 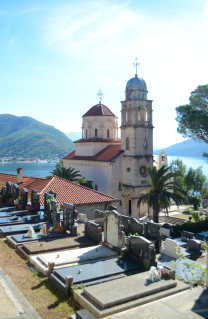 Be aware you may encounter a child or family that ask for coins at the entrance–admission to the monastery is free and unstaffed, so there’s no need to pay.

Kanli Kula (or “Bloody Tower”) dates back to 1539 when the Turks reconquered the city of Herceg Novi. Located in the upper area of town, it served as a prison until the 17th century, and you can still see some inmates’ carvings of crosses, fish, and galleys on the walls. Since 1966 it has served as a much more pleasant space, hosting summer concerts, theatre performances, and the Herceg Novi film festival, all overlooking the water.

Of course, in October, it’s a bit more ominous, retaining a bit of that old dungeon-y feeling, especially if you visit on a cloudy day. Regardless, it’s one of the best places to get a view of the city below, and with only a 2 euro entrance fee it’s worth wandering the stone staircases and getting into the historical spirit.

Watch the sunset from the beach

The spot where I sat to watch the golden sun dip behind the mountains was appropriately named “Golden Bay,” but anywhere along the water will do. Especially in fall, when the town is a bit calmer, the sunset becomes a main event. Both tourists and locals come to the shore’s edge and quietly enjoy the stunning phenomenon of the sun going down, often snapping pictures or cooing at its beauty.

After the sun disappears and there’s still some ambient light looming in the sky, walk along the promenade from one end of town to the other. You’ll likely see some kids practicing water polo at the local pool–apparently water polo is the favorite sport of Montenegrins and a serious pride point for them–as well as families stopping at the popcorn stand and couples showing as much affection to the Herceg Novi street cats as each other. 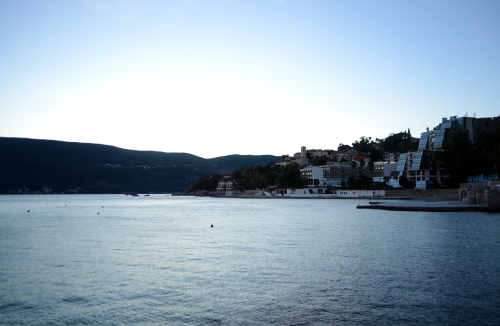 If you’re looking for a place with tons of activities and adventure, Herceg Novi may not be the place for you. But if you want to visit somewhere small, lovely, and refreshing for your tired traveling soul, you can’t miss it.

On a Balkans trip? Don’t miss my advice for visiting Mostar, Blagaj, Travnik and Jajce, or Sarajevo, all just north of Herceg Novi in Bosnia and Herzegovina.

7 thoughts on “Travel With Me: Herceg Novi, Montenegro”