When you visit Mostar, you’ll likely see ads for a greater Herzegovina tour that includes Blagaj, a small village mostly known for the tekija or Dervish monastery that sits next to the source of the Buna river.

If you have more than just a day in Mostar, definitely consider spending a few hours checking out Blagaj. This blog post is a good starting point for planning the logistics of your half-day trip, but I’ve got additional tips for your Mostar to Blagaj trip:

I definitely let out a groan when my 7am alarm went off to catch the 7:45 bus to Blagaj. “Just take the 10am bus,” I told myself. “There won’t be that many tourists wandering into your photos.”

But deep down I knew there would be and I’d kick myself for it. And I wasn’t letting that happen.

Since most tour groups meet at 8 or 8:30 to do the full Herzegovina tour, you can preempt them by arriving early. If you have a car, your timing is more flexible, but with fewer choices for bus journeys, your best choice is to go at 7:45.

Bonus: You get to wander Mostar a bit before the town fully wakes up, which is nice for capturing photos of the Neretva river or simply enjoying the calm (and cooler weather). 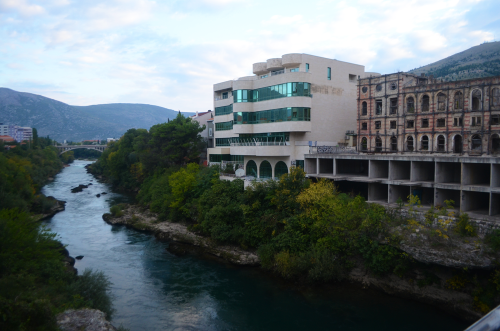 When you get off the bus in Blagaj, follow the signs for the tekija (and when they drop off, follow the path closest to the river–or look lost and hope a nice Bosnian man helps you, like I did). There aren’t explicit indications of how to get to the other side of the river to the lookout/photo spot, so you have to cross the second bridge that leads into a restaurant and climb up the questionable path behind it.

Do this for two reasons: 1) Beating the crowd–if you get your tourist-free photos first, you can relax and enjoy the dervish house after. 2) GOATS. 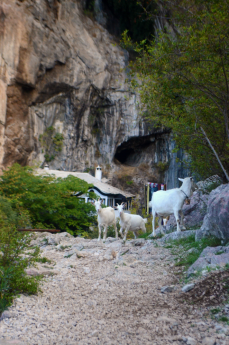 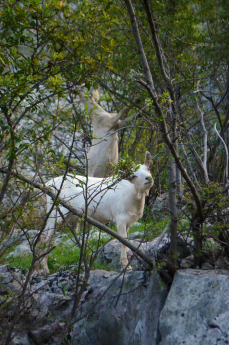 Okay, maybe you aren’t as into goats as I am, but still. As the first person to visit the tekija on the day I went, I had the unique privilege of seeing these skittish creatures grazing. I definitely wasn’t expecting to run into this little herd. You have to tread lightly, though, otherwise they’ll spook and run into the hills.

This is an active dervish house, so women have to cover their heads and dress modestly (men are also expected to respect certain modesty rules). Because I was the first to arrive at the tekija, I missed the sign that told me to wear a head scarf and had an awkward encounter with a woman who gestured wildly that I needed to cover up.

The dervish house was built in the early 15th century and has been used actively since then. The entire complex includes many spaces: tombs, prayer rooms, guest room, kitchen, bathroom, washing room, and courtyard. Take your time exploring, looking out the windows to the river, and admiring all the little details of the space.

There’s also an easy-to-miss exhibit upstairs with Arabic calligraphy and sacred illustrations. It’ll only take an extra few minutes to see (especially since there’s no English descriptions) but it’s worth checking out.

Yes, the tekija itself is the main attraction here, but I’m equally partial to the natural rock formations and the river’s beauty too. Take a moment to breathe in the natural elements too.

Catch your bus back.

I planned to take the 10:30 bus back to Mostar, which meant I had some time to kill after checking out the tekija. At 10:10 I was sitting in a nearby cafe sipping a coffee when the city bus came by and headed back to Mostar. I paid for my coffee and analyzed the bus schedule posted by the stop with a similarly confused Bosnian woman, but both of us ended up having to wait for the 11:30 bus.

Tip: The spot that says “bus stop” isn’t actually where the bus stops. You’ll see people standing down the street at an unmarked location (walk in the opposite direction from the tekija, towards the road to Mostar). Why not move the bus stop sign? Who knows!!

Spending time in Mostar? Check out my recommendations for things to do there. Or head north to Sarajevo for a three-day itinerary or even farther north to the medieval towns of Travnik and Jajce.

4 thoughts on “Travel With Me: Mostar to Blagaj Day Trip”