After Sarajevo, Mostar is THE destination city for backpackers, day trippers, and other travelers in Bosnia & Herzegovina. As cultural capital and most well-known city in the Herzegovina region, it’s not to be missed. Whether you find yourself here for just a few hours on a day trip or for a few days (habitually adding night after night to your hostel stay like I did), you’ll find something to fall in love with:

Old Town and Stari Most

Mostar means “bridgekeeper,” so it’s no surprise that Stari Most (Old Bridge) and the surrounding area is the main attraction of the city. It’s impossible to visit Mostar without seeing its huge, iconic Ottoman-era arched bridge over the Neretva River in the center of town.

Tips for visiting the bridge:

While souvenir shoppers will love the Old Town that surrounds the bridge, I don’t much care for it. There’s a nice art gallery where I bought a postcard, but otherwise the restaurants are overpriced, the stores are filled with the same “authentic” nonsense everywhere you go, and you’ll have to play push-the-tourist to get anywhere. It’s a zoo.

Tucked into the tower in the western end of Stari Most is a small exhibit of photography by Wade Goddard, a photojournalist from New Zealand who documented the war tragedies of the former Yugoslavia during the early 90s.

If you visited Sarajevo before Mostar and found the Bosnian War history fascinating, this exhibit is a great way to continue learning about what happened here. If you’re visiting Mostar on your way to Sarajevo, it’s a quick intro that’ll likely pique your interest before going in-depth in the capital. With a fee of only 3 euros/6 Bosnian marks, it’s not too hefty of a price tag and it’s interesting to read the artist’s commentary about his experience capturing these shots. Plus, you can get views of the bridge and river from above–always a plus.

Note: If you visited the War Photo Exhibition in Dubrovnik before visiting Mostar, some of the photos will be familiar.  In my opinion you could skip this exhibit (it is much smaller and has less detailed information) if you visit the one just across the Croatian border.

Spanish Square is the other main hub of Mostar. The gorgeous Moorish Gimnazija Mostar (a high school that I’d actually WANT to attend!) sits on the corner and is a sight to behold all its own. After snapping a few photos and reveling in its beauty, turn your attention about 90 degrees to your right to the Sniper Tower. 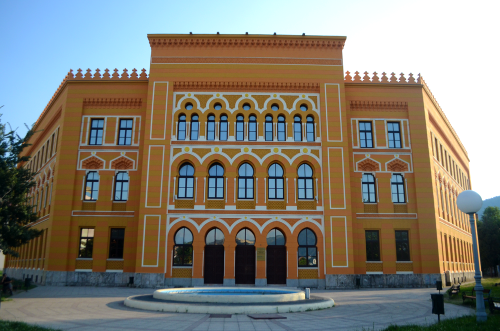 A former bank turned sniper tower during the War, the building now serves as an incredible relic of that time. Graffiti (from political to personal to truly random) fills its walls while broken glass and old bank records litter the ground. 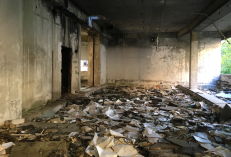 It’s surreal to poke your head into the empty elevator shafts, read the handwriting of bankers who may or may not have survived the War, and climb up to the rooftop to see over the whole city (especially at sunset).  It can be a bit spooky to wander through, but it’s the ultimate anthropological interest point.

Just across from the Sniper Tower is a city park with tons of green space, playground areas, and–strangely enough–a statue of Bruce Lee.

The story behind the statue is quite poignant. Since Mostar has a divided population of Bosniak Muslims, Croat Catholics, and Orthodox Serbs, there is still some tension between these groups over territory and power. In the early 2000s, the Mostar Urban Movement youth group wanted to create something to unite everyone in Mostar. And, apparently, something that each of these unique groups has in common is a fondness for Bruce Lee. He stands in Park Zrinjevac for all to enjoy, regardless of ethnicity or religion.

I love to do the wander-until-you-find-something-cool style of travel, so the day I arrived in Mostar I set out with a map in my back pocket (that I never even looked at) and found a park along the eastern side of the Neretva River just around the corner from Stari Pazar. I don’t know if this wonderful gem has a name (Google Maps was no help!) but you can find it by looking for the Aleksa Santic Monument that stands proudly under the park’s gorgeous trees. Aleksa Santic was a famous poet from Mostar whose former house sits adjacent to this park and who used to lend his name to the Mostar Gymnasium mentioned earlier. 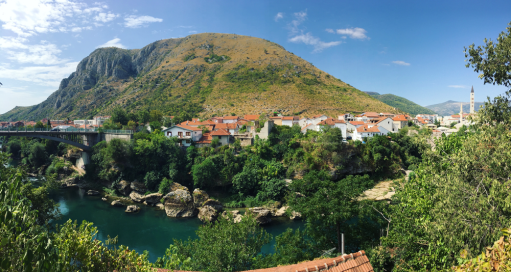 This park is a great place to relax, escape the sun and crowds, and enjoy the view of the city and its gorgeous surrounding mountains and the river below. Definitely continue past the park to Stari Pazar too, where you can take Old Bridge panoramas without fighting with tour groups. It’s windy on the bridge though, so be prepared and hold your camera tight!

Even though I spent a long time in Mostar (note: it’s mostly because I felt so happy and comfortable at my hostel, Golden Bridge, that I didn’t want to leave–so there’s a hearty recommendation for you), there’s still a lot that I didn’t see that I’d like to go back to.

Muslibegovic House, the Trdava Werk fortress on the hill, Kravice waterfalls, and Tito’s Bunker (actually in the nearby town of Konjic, where I did some incredible whitewater rafting) are all places I wanted to visit. It’s safe to say I have a return trip to Mostar in my future!

3 thoughts on “What To Do in Mostar, Bosnia and Herzegovina”