Goodreads recently published an infographic entitled “Sex and Reading: A Look at Who’s Reading Whom” with stats collected by 20,000 male users and 20,000 female users of the site.

The takeaway is this: men and women each primarily lean towards reading their own gender. Yet those first two circles are troubling–only 20% of a female’s audience will be men, yet women make up half of a male author’s audience.

In Maureen Johnson’s “Coverflip” challenge, people redesigned covers for the opposite gender, showing how they affect our perceptions of their merit.

Books written by female authors tend to have “girlier” covers than those written by men, which tend to be more gender neutral. These covers lean towards “feminine signifiers“: pastel colors, pensive or dramatic female models, and curly script. Covers of books written by men are more likely to have darker colors, active models or no model at all, and stronger typography.

We judge books by their covers, despite the old adage that warns us not to. And these images affect how we see these books, often relegating profound and relatable books written by excellent female authors to a “chick lit.” This dumbing down of books centered around female protagonists and/or written by female authors implies a greater insult to women in general: that women can’t or don’t want to handle tougher themes in literature, that breezy summer reading is the only genre that attracts females.

Aside from the marketing differences between male and female authors, there’s also a cultural bias that assigns higher importance to male authors. This bias begins early, as kids start to realize that the books they read in school tend to be written by men about male protagonists and women’s books are rarely lauded as valuable.

A stereotypically female cover turned masculine–which one are you likely to see in schools or as a NYT Bestseller?

Maureen Johnson says it best: “When we’re kids, we learn what good books and bad books are because someone tells us. They tell us in classes, through the selection of the books that are considered worthy of study…My college reading was 90% male.”

She mentions that classes that feature only female writers are considered highly specialized–belonging to the Women’s Studies department or sometimes upper-level English classes. “Because it wasn’t just literature — it was a specialized demographic,” she writes. “I would love a world in which books are freed from some of these constraints.”

My school experience hasn’t been much different, and you can see that clearly in how I’ve tracked my reading on Goodreads.

That’s pretty even. I’ve read roughly the same number of books by men and women this year and enjoyed them about as equally.

The main difference between my reading choices between those two years? In 2013, I was a senior in high school. The majority of the books I read and rated on Goodreads were written by men and chosen by my town’s school board for their literary merits. This year, I hand-selected every single one of those books as extracurricular reading, and I ended up reading men and women almost equally.

My Senior AP English teacher made a valiant effort to include female voices in the classroom. He was a feminist. We frequently discussed gender roles in class. He encouraged the girls to explain their experiences to him. He admitted that because of male privilege he could never 100% understand. He assigned as many works by females as he could (Toni Morrison, Nadine Gordimer, Flannery O’Connor, Joyce Carol Oates), but only only two of those were full-length novels. He couldn’t get around the school board’s male-oriented curriculum.

Junior AP English wasn’t much better: we did have a “women’s issues unit” where students got to choose one of four novels to read and discuss in small groups. Two of those “women’s issues” novels were books written by men about women. Ah, yes, reading about women from a male hand, I definitely need more of that in my life. 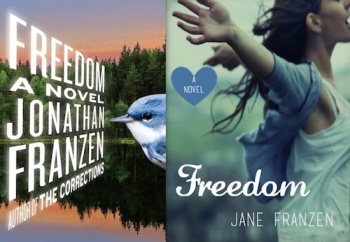 On the left: a novel that may make you reconsider what freedom means. On the right: a “beach read” about teen romance.

Literature is valuable because it makes readers consider other perspectives. The English curriculum fails to represent multiple perspectives, however, when the only books assigned are written by males about males.

“Can you imagine classes in which guys read nothing but Germaine Greer, Eve Ensler, and Caryl Churchill?” Maureen Johnson writes, “Boys [must be] more delicate…To ask them to read ‘girl’ stories (whatever those might be) will cause the whole venture to fall apart.”

English class is arguably the main venue in school for instruction on critical consumption of information. Books are extremely powerful in coloring young people’s opinions and points of view.

How can we expect our boys to become men who understand and fight for gender equality if they never read books from female perspectives?

36 thoughts on “Sex and Reading”