After gallivanting around Spain and Portugal for five weeks, it was time to come home and get to work. 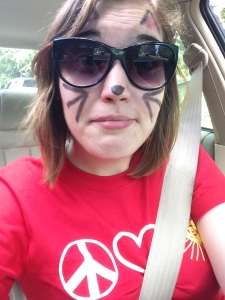 As a child, I spent most of my summers at a new camp every week, learning about animation or volleyball or astronomy. I adored my counselors; it was refreshing to have energetic, caring leaders who weren’t “old” (at age 8, anything over 30 seems old). They were my role models, and I hoped to someday be as cool as they were.

And I guess I must be cool now, because this summer I’m working full-time as a day camp counselor at the Jewish Community Center. Last week we did staff training and hosted a summer kickoff party for the campers, where I indulged myself in the ubiquitous camp tradition of face paint and became a cat.

One of my goals as a counselor is to spot kids who are shy or have a hard time interacting with other campers. I’m fairly outgoing now, but my dirty little secret is that I was terrified of meeting new people as a child. It only makes matters worse when a lot of them already know each other (at JCC camp, a bunch of the kids are “lifers” or stay for many weeks throughout the summer). I remember really appreciating counselors who made an extra effort to engage me when I was feeling shy, so I’ve made a point of doing the same.

This week I’ve been assisting in painting camp, which has a pretty calm classroom environment, and I’ve loved getting to know my campers by chatting with them about anything and everything while we paint. 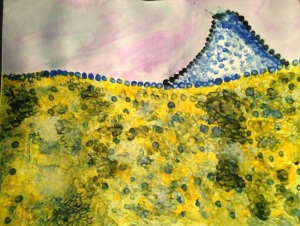 On Monday, I sought out one shy camper while watercoloring. She told me about how her grandma is an artist and the two of them create watercolor paintings in grandma’s studio. I loved hearing this little piece of her life and I noticed her feeling more comfortable talking to other kids once I got her warmed up–just like how I was at that age.

Today she was absent (it’s like she’s trying to break my heart) so I sat at a more talkative table while we created pointillism paintings. The girls had such a hard time with the concept of blending colors on the paper instead of the palette, so I modeled the technique on my own painting. With a lot of encouragement from me, they finally got it, despite some initial pointillism-induced impatience and frustration.

Needless to say, I’m loving camp so far. While I expect the kids will tire me out by week 10, I’m excited to hang out and play games with some awesome campers this summer, all the while fulfilling the same role my incredible counselors did for 8-year-old me.