Every now and then I get asked how I got the name Sabina. The question doesn’t bother me: it’s an unusual name and people often assume that it has an interesting background. The trick is knowing whether they want the short answer or the long answer. 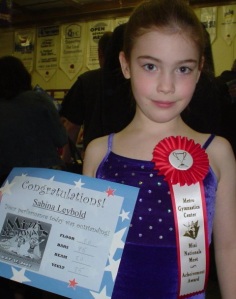 The short answer is that my parents first heard the name when my uncle dated a girl named Sabine (pronounced the same, but using the German spelling rather than the more Americanized version). I always emphasize that I’m not named after her, that was just their first exposure to what would end up identifying me.

The long answer is that my parents, like most others, went through a couple of ideas before settling. My dad thought it would be cute if my name started with a Z because my older sister’s starts with an A. He suggested Zalenka. My mom nixed that one.

They also liked the name Britta, but were worried I’d get teased for having the same name as the water filter, which admittedly isn’t an unreasonable concern.

The story of my name allegedly goes that when I was born, my mom looked into my eyes and asked, “Who are you? Are you Britta or Sabina?” And apparently I answered “Sabina.”

Seems like an awfully big decision for a newborn if you ask me.

For my entire life I have grappled with my name. I hated how unusual it was. Most people don’t have a frame of reference for Sabina, so it throws them off easily. I didn’t want to be another Emily or Sarah, but something a little more “normal” would’ve satisfied me; as an elementary schooler I longed to rebrand myself as Samantha and even built up a bit of resentment for my parents for not choosing one of their other options.

I didn’t like how Sabina isn’t easy to make nicknames out of. That seems petty, but I longed to have a cute one-syllable nickname that my friends could call me as an alternative to that three-syllable monster. For a brief time in 7th grade–just long enough to make it into an email address that haunts me to this day–my friends called me “Bina.” I actively rejected all other variations on my name (Bean, Sab, none of that nonsense). I couldn’t control that I had been named Sabina legally, but I could refuse pet names that I didn’t feel fit me any better.

The worst part, though, has always been being called Sabrina.

One summer I went to a camp for Talented and Gifted students, and despite being accomplished enough to attend, the staff apparently figured I couldn’t spell my own name. My door tag read Sabrina. I sassily took a silver Sharpie to it, making my door tag read SABINA NO R.

While I still get called Sabrina fairly often, I no longer feel the same animosity towards my uncommon name. I’m much more open to nicknames now. “Bina” sounds strange to me since it’s been dormant for so many years, but my friends at college have dubbed me “Sabby Superstar” and “Sardina” (along with a variety of other unrelated monikers) and I embrace them.

It’s been a long love-hate relationship, but Sabina does fit me well and it makes me unique. I can’t imagine being called anything else.

Maybe choosing a name was a big decision for newborn me to make, but I’m glad she chose Sabina.

This post is part of the Weekly Writing Challenge: Power of Names.