I’m a cat person. I’m now getting over vestiges of my childhood fear of dogs, but I’ll always be more comfortable around cats. Except for a two month stint between the death of our beloved Blackie and the adoption of playful Naomi, I’ve had cats continuously since I was four years old.

The last place I expected to see kittens, though, was on the roof of an abandoned building next to our apartment in Toledo, Spain. We opened the windows to check out the view and looked down to find an orange mama cat with five kittens: four orange, like her, and one black with some orange markings. One kitten pounced on her mom’s tail as it flicked back and forth, one slept in between the rows of roof tiles, and the others wandered around their rooftop territory, playfully bumping into each other as they stirred up mischief in the gutter.

We’ve spent a lot of time at the window watching them and exclaiming how cute they are. Siamese daddy cat showed up on the second day, and he and mama have since then alternated supervising the kiddos, presumably taking turns hunting and scavenging for food. While daddy watched the kittens, two other cats–one grey with stripes, the other black with white markings a la Mr. Mistoffelees–ventured onto the roof. My sister and I hoped to see a turf war go down, but he didn’t seem to notice the intruders before it was time for us to go to the Cathedral.

At this point I’ve seen so many churches and cathedrals throughout Spain and Portugal that I’m completely desensitized to their unparalleled beauty and grandeur and thus don’t have a lot of commentary to provide (we haven’t been counting churches, but Toledo is the 12th city we’ve visited, so that gives you a reference point). That being said, the cathedral here is gorgeous, so I’ll let the photos speak for themselves. 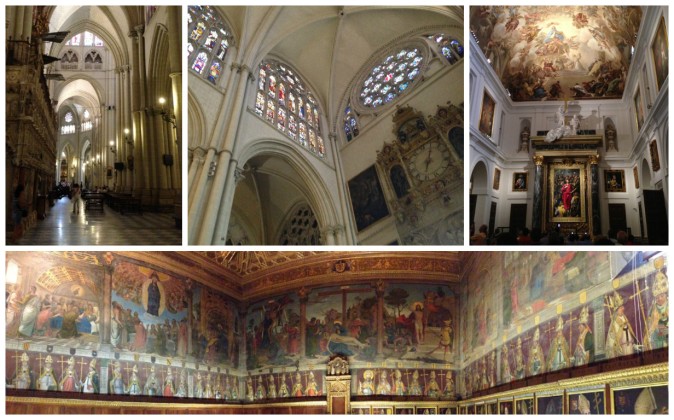