The Sagrada Familia is Antoni Gaudí’s most famous work of architecture, but it definitely isn’t his only design that attracts tourists to Barcelona. 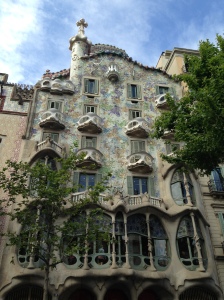 Casa Batlló is sometimes called the “House of Bones” because of its facade, which has skeletal pillars and balconies. The green and blue tiles that cover the facade also give it an underwater feel that continues throughout the house (it’s astounding how many times the audio guide used the word “undulating” in reference to one of Casa Batlló’s design elements).

Gaudí’s incredible design combines structural rationality with symbolic ornamentation. To make the house as functional and intuitive as possible, Gaudí thought through every structural detail–ventilation, light, drainage–and how to make these also aesthetically pleasing.

For example, one hallway has windows that resemble a fish’s gills in appearance, but also serve the purpose of providing perfectly customized ventilation and temperature control. And, of course, these windows go along with the serene water theme. 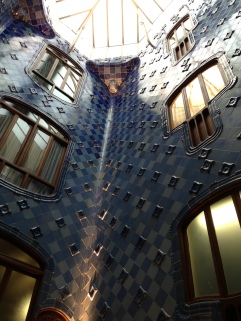 As we already learned from the stained glass in the Sagrada Familia, Gaudí loves to emphasize light, especially thoughtful use of natural light. In the Casa Batlló, he used an equalization technique in the interior courtyards to ensure that each floor received the same amount of sunlight. The lowest floors have have light blue tiles and large windows, while the tiles near the top floors are dark and the windows are smaller.

Gaudí’s equalization of sunlight exposure was to an effort to guarantee the comfort of the Casa Batlló for its residents. With the same purpose, he also designed ergonomic railings and door handles that fit perfectly into the human hand. While it seems a bit trivial, Gaudí recognized that even small details can affect a building’s atmosphere, and he wanted his design to yield a house that would be as livable as possible.

While Gaudí’s repetition of waves can be seen all over the interior of Casa Batlló, his exterior tilework is definitely what distinguishes his work from other architects’ designs. The bottom left photo is from the house’s rooftop garden, where flowers are planted in the wall’s alcoves so their time in the shade and in the sun is optimal. 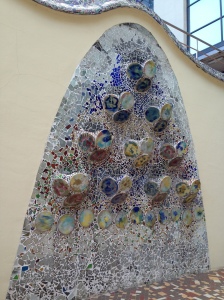 Gaudí’s work is amazing because it is so well-thought out. I’m a sucker for art that both serves a function and is pleasing to the eye, and Gaudí refused to resign himself to creating a house that was rational or beautiful. He worked to blend both priorities, resulting in brilliance: the Casa Batlló.

Join 4,002 other followers
My Tweets