Art museums aren’t my thing. There, I said it. Both early and contemporary art make me feel unintelligent: historical art reminds me that I should know these biblical stories, and modern art seems to wave its abstract hand in front of my face and say “nananananana, you can’t get me!”

European tourism is all about churches and art, though, so I’ve had to push through a few art museums, and ended up actually enjoying both the Picasso and Dalí museums. 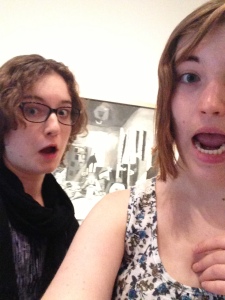 The Picasso museum doesn’t allow pictures, but we managed to get a selfie anyway.

The Picasso Museum in Barcelona surprised me in a lot of ways. Because so many of his famous cubist works are exhibited elsewhere in the world, the museum only had his lesser-known works from his early and late days as an artist. It was strange that there was almost no mention of cubism at all, since that’s what made Picasso legendary, but it provided an opportunity to learn more about his artistic journey. I had no idea he was either 1) so prolific (so much of his work was missing, yet they could still fill an entire museum with his art) or 2) so much of a prodigy (some of the paintings on display were from his adolescence, and they were incredible). If you want to see Les Demoiselles d’Avignon and Guernica, you’ll be unsatisfied. But if you want to understand more of Picasso’s life and art beyond what makes him famous, I recommend this museum.

The Dalí Museum in Figueres is roughly two hours away from Barcelona by train, but it’s also worth the visit. Like Picasso, I didn’t know much about Dalí’s works and artistic journey beyond The Persistence of Memory and Living Still Life. He was also extremely prolific, and didn’t limit himself to the medium of painting. I had no idea that Dalí also created intricate jeweled pieces and worked with metal, plaster, and wood to create multimedia sculptures that illustrated his famously surrealist perspective in a different style. One of my favorite exhibits was a series of yearly Christmas greetings. They went beyond standard holiday imagery, yet still maintained a uniquely festive approach.

It’s amazing to me that someone could be so talented in so many distinct areas–most artists specialize in one medium and possibly dabble in others, but Dalí’s sculptures and jewels were just as beautiful as his famous surrealist paintings. This is another example of how, similar to the Picasso museum, the Dalí museum was a great opportunity to explore another side of an extremely well-known artist. For lot of his works, especially earlier ones, I wouldn’t have ever guessed they were Dalí, but now I’ve been able to experience his true variety of styles and talents. 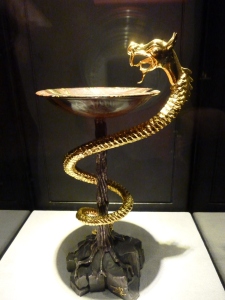 6 thoughts on “Picasso and Dalí”