With a week to kill in Denmark before my friends would join me in Copenhagen, I set off for Odense, the country’s third largest city and the birthplace of Hans Christian Andersen. It seemed like a nice place to spend two days exploring Danish culture away from a truly urban environment.

All I knew about Odense was its connection to H.C. Andersen, but even then I didn’t know how deep those ties ran. He’s everywhere: his face in statue form (or buoy form), his words written on walls and windows, his books in dedicated stores, and his home unassumingly situated alongside many others. 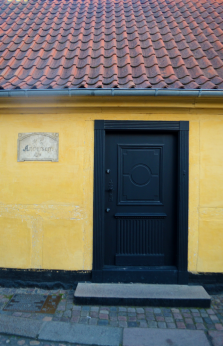 Beyond their pride (or desire to attract tourists) in H.C. Andersen’s legacy in Odense, I didn’t know what else to expect from the city.

What I found was an adorable town (despite some buildings being built so unevenly they looked like they could collapse at any moment) and laid-back, friendly people who love sitting in parks. Seriously. Most of my time spent in Odense took place in parks.

In various green spaces I found myself in a political discussion with a random drunk Dane, witnessed two girls play a version of beer pong in which the cups were placed on the ground instead of on a table, and accidentally walked into a party of some sort that I was definitely not invited to. I saw twelve very blonde children blow up a huge mattress and jump on it for almost an hour (how did they have the energy?!). I drank my first Cocio, a Danish chocolate milk drink, and ate “American potatoes” (which were just roasted potatoes). 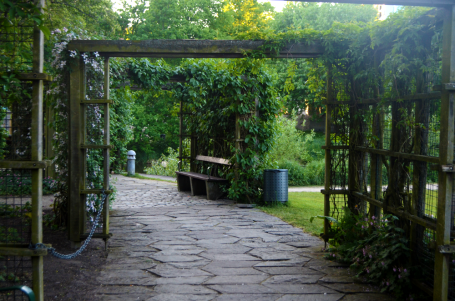 The best part of my visit, though, was getting to know Denmark through the eyes of my Couchsurfing host. I’d never Couchsurfed before, and I turned out to absolutely love the experience. My host showed me around the city while explaining Danish customs and politics, and he was extremely patient with all my questions (I love asking “what’s this?” even if I don’t expect someone to know the answer). Couchsurfing gets you a free place to stay, but more importantly staying with a local shows you the culture in a way that you can’t get from sleeping in a hostel.

We did so much strolling around the city and lying in grass that I actually never made it to the H.C. Andersen house and museum. But I fell in love with Odense’s cozy streets so quickly that I know there’ll be a next time–the H.C. Andersen story is just one more thing to return to.

2 thoughts on “I Fell in Love with Odense”