Between the extravagant exterior and the highly official-sounding name, I imagined the Museum of Vancouver to be as extensive as The Museum of the City of New York or even The British Museum. 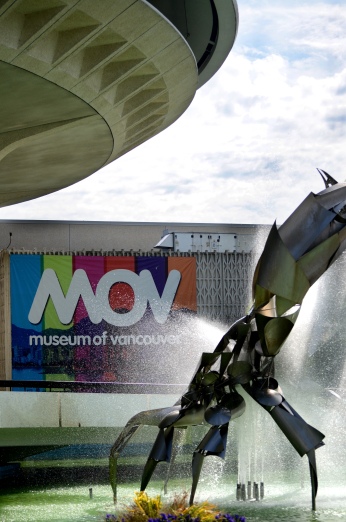 But the MOV turned out to be more humble than I expected. I wasn’t disappointed, per se, and in fact I quite enjoyed it, but I was surprised that it felt more personal than regal.

For starters, MOV is only made up of three exhibits. (Well, four, but one was closed when I went.)

The first is Stefan Sagmeister’s “The Happy Show.” Sagmeister combines infographics and interactive pieces that discuss sources of happiness from psychology to family to sexuality. All the installations include handwritten explanations or discussions, which makes it feel like reading class notes or a letter from a friend.

Visitors are asked to write sticky notes about what makes them happy and to rate their happiness 1-10. I loved seeing all the different ways people find joy in their lives, and I found it interesting that most people rated themselves as being very happy. 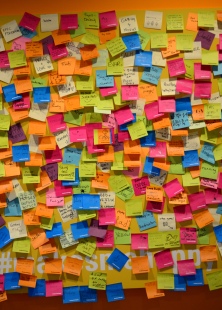 Some of his musings and ideas were deep and really made me think about my own emotions, and some were more light-hearted and humorous.

I’ve spent hours thinking about his proposition that people should take five years of their retirement and intersperse them into their working lives in order to contribute more to society. I also enjoyed his analysis of why we remember negative things more clearly than positive things and how that affects what we consider “news.” And I love how he turned an ordinary thermostat into one having an existential crisis. 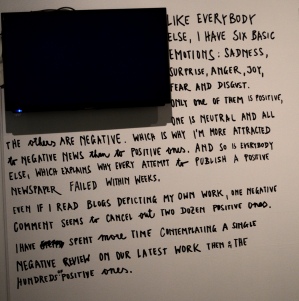 After checking out the rest of the show (there’s A LOT that I haven’t mentioned), I went to the next exhibit: “c̓əsnaʔəm, the city before the city,” which focuses on the relationship between indigenous and settler societies in Vancouver. It discusses tools, geography, and language, and how all these things are important to preserve.

The language aspect, of course, appealed to me, because of my experiences with speech-language pathology. Their language has sounds that we’ve never heard and may not even be able to discern because of our lack of exposure.

I’ll be honest, I didn’t spend much time in this exhibit. I was exhausted and fading fast (I went to MOV the same day as my 5am photo shoot at Granville Island–by 11am I’d already been walking/lugging camera equipment for roughly 6 hours straight), and the dark room was putting me to sleep.

So I moved on to the next exhibit: a series of rooms showing what Vancouver was like in the 20th century. There were artifacts of everything from the the immigration boom and racial tensions with the incoming Chinese population to neon signs and replicas of 50s innovations.

At first, I was surprised at how similar the histories of the U.S. and Canada are, especially with Japanese internment and the Civil Rights movement. Then I was surprised that I was surprised. We’re taught U.S. history as if it’s completely unique, but social issues don’t exist in isolation. The fight for a better standard of living is universal.

After about two hours of sauntering through MOV, I was ready for a nap. But I’m really glad I went.

Not only did I discover some interesting history about both industrialized and indigenous Vancouver, I got to learn about myself. Definitely worth the price of admission.

For more posts about my trip to Vancouver, click here.

41 thoughts on “Museum of Vancouver”