Ithaca is known for its restaurants, including world-famous vegetarian restaurant Moosewood. The downtown area has lines out the door and two-hour-long waits for tapas, burgers, and pasta. 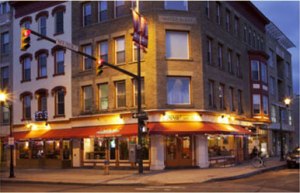 One of these institutions is Viva Taqueria, right on the corner of the Commons. It’s one of the local favorites for sit-down dinners and takeout of burritos, enchiladas, and tacos.

“I haven’t been to Viva” is met with gasps of surprise and horror. “I don’t like Viva” is a phrase that can ruin a friendship here. That’s how seriously the students from Ithaca College and Cornell University take Viva.

But I don’t like Viva. Mostly it’s because it doesn’t live up to the hype. The service isn’t bad, but it’s not great either. The wait is long because it’s a popular, centrally-located restaurant. And the food isn’t particularly authentic.

I’ll admit I’m a bit of a Mexican food snob–being from the West Coast will do that to you–and I find Viva subpar. No pan dulce, no horchata, and the menu is entirely in English (they even sell Caesar salad–completely unacceptable). It’s nitpicky, but to me that’s what makes a “taqueria,” not just selling tacos.

I’ve fallen victim to the “how could anyone not love Viva?” gasp, but I don’t really mind. Other people can continue to wait an hour for a table of mediocre Mexican-ish food, and I’ll go to Chipotle. It doesn’t really live up to the hype either (gasp), but at least nobody’s pretending to be authentic.

This post is part of my April A to Z Challenge. For more All Things College posts, click here.