But sometimes it’s much more low-key: Saturday night in your dorm room with a handful of friends, quietly watching Arthur on Netflix and taking a sip whenever he does an outfit change.

That’s right, we have an Arthur drinking game. 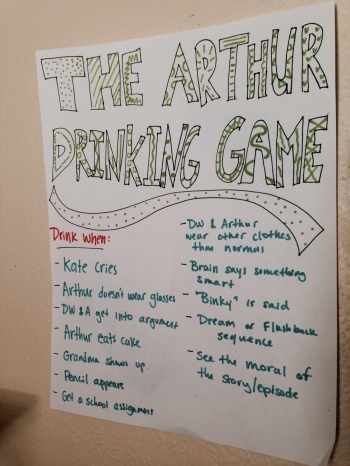 Our other favorite game is Cheers to the Governor.

The basic idea is that everyone goes around in a circle counting up to 21, but it gets progressively harder as numbers are replaced with phrases, topics, or gestures. The only hard-and-fast rules that must be followed are that 7 and 14 are switched and 21 is “Cheers to the Governor.” The rest are up to your creativity and vary from game to game. Sample rules include:

If you mess up your turn by forgetting to substitute an established rule, you drink. If you take too long to come up with a breed of dog (for example) or repeat one that’s already been said, you drink. After somebody drinks, the next person starts with 1. If you say “Cheers to the Governor,” everybody clinks glasses and drinks, and you decide a new rule that everyone must follow.

Why would you dress up and go out when you could watch Arthur eat cake and get trapped in the library? Why subject yourself to getting beer spilled on you at frat parties when you can sit in a circle saying numbers in silly accents and spouting names of kitchen appliances?

I, for one, think that would make a better college movie than neon lights and keg stands.

This post is part of my April A to Z Challenge. For more All Things College posts, click here.