What it is:  Gang Leader for a Day by Sudhir Venkatesh is an inside look at gang life in the Chicago housing projects, particularly the activity of the Black Kings at the Robert Taylor Homes during the early 1990s. Venkatesh spent years in and around the complex, collecting data and anecdotes for his graduate work in sociology. He also spent a day posing as a gang leader, attempting to negotiate problems between Black Kings members . 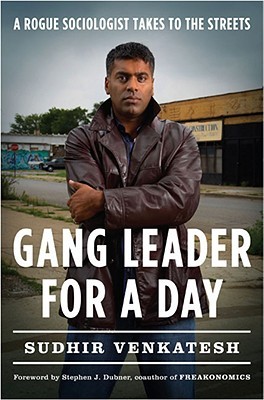 What I liked about it: Venkatesh details his time at Robert Taylor in a mostly chronological fashion, entering with almost no understanding of the poor black experience that he wanted to document. While this book is chock-full of information and anecdotes about how gang activity influenced the South Side of Chicago, there’s still an element of ignorance. Even after years spent in the projects, Venkatesh still can’t truly understand this population and their unique issues, and neither can we, as readers. Yet the book is still a uniquely fascinating insight into issues of race and poverty, and how gangs both endangered and protected the residents of Robert Taylor.

What I didn’t like about it: Throughout the book, Venkatesh references that he collects numerical data on the economics of the gangs and the projects, yet doesn’t provide a lot of those concrete findings.

Memorable quote: “People in this community shouldn’t have to wait more than a week to get a new front door…shouldn’t have to wonder if the ambulance or police would bother responding…shouldn’t have to pay a go-between like Ms. Bailey to get the services that most Americans barely bother to think about. No one in the suburb where I grew up would tolerate such inconvenience and neglect. But life in the projects wasn’t like my life in the suburbs. Not only was it harder, but it was utterly unpredictable, which necessitated a different set of rules for getting by.”

Additional notes: I found this book through a Goodreads recommendation after I read There Are No Children Here, one of my all-time favorite nonfiction books that also discusses issues of race, crime, and poverty in the Chicago housing projects. If you’re interested in this review, I also highly recommend that book as further reading.

Gang Leader for a Day is book 2 of 24 for my Read Harder Challenge. You can click here to check out my first #ReadHarder review for my guilty pleasure choice, The Disaster Artist.

An affiliate link is used in this post. All opinions in this review are my own and are not influenced by the affiliate.

4 thoughts on “Review: Gang Leader for a Day”