Even though I finally jumped in the gorges and went apple picking, I’m not done ticking items off the Ithaca bucket list.

My college has a great theatre department, but I hadn’t been to a show yet. I was dying to go to The Crucible last year, but my friends at the time had no interest whatsoever in going with me. Tickets were $16, which is reasonable in the grand scope of things, but seemed a bit pricey for a college event. 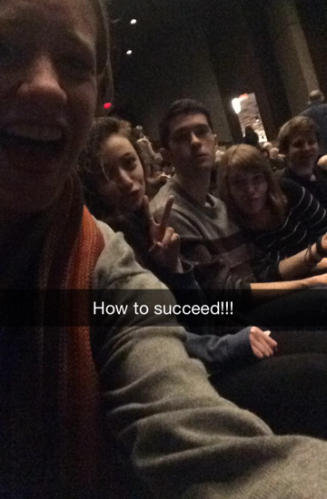 Then I heard that the theatre department was producing How to Succeed in Business Without Really Trying. After hearing such good things about the musical’s run on Broadway, I decided to throw down the $16 and go.

The show was funny at the right times–both clever physical humor and quick wordplay–with breaks of poignancy and character development. The songs were catchy and moved the story along well. The actors were talented, and, most importantly, the boys could dance.

I guess I shouldn’t be surprised–let’s be real, they’re training (hopefully someday) to be on Broadway–but after seeing dozens of high school shows in which the boys couldn’t even walk without looking awkward, I was pleasantly surprised at how fluidly the actors in How to Succeed lept and glided and spun across the stage. Some of the dance moves were pretty advanced, too, including a quick kickline to backflip combination.

I realized halfway through that the reason $16 seemed steep was that I had relatively low expectations for the quality of the show. How to Succeed in Business Without Really Trying blew me away. It may have been my first show, but I highly doubt it’ll be my last.

Liked this post? It’s part of my “Firsts” series on the first of each month. For more, check out my first rickshaw ride, first karaoke, and first pizza delivery.

4 thoughts on “First Show: How To Succeed”