On November 1, 1755, an enormous earthquake hit Lisbon. Thousands of people had left their homes for church early in the morning to light candles in honor of All Saints’ Day. As buildings shook and crashed to the ground, they erupted in flames, and the people of Lisbon ran down to the large open plaza near the river to get away from falling debris. As they gathered on the square, a tsunami suddenly rose up and swept them out to sea. Needless to say, the day was a trifecta of terror and destroyed nearly all of Lisbon.

Following the earthquake, the Marquis of Pombal (the prime minister) was responsible for recreating the city. Everything that remained of Lisbon was demolished, and the whole city was rebuilt according to new regulations. Buildings would be identically designed to be shorter, more flexible, and farther apart.

The new construction rules didn’t only serve to minimize damage in case of another disaster, however. The Marquis also used them as a way to minimize the influence of the church. He wanted to promote commerce, but he realized nobody would ever arrange trades in front of a house of worship, so churches in downtown Lisbon are

extremely discreet. Finding a church amongst the shopfronts requires scouring the street for a cross. Instead of Where’s Waldo, people of Lisbon have to play Where’s Jesus.

The Marquis’ choice to reduce the church’s presence in the city was a risky one, because in Europe religion dictates everything: relationships between countries, familial ties, artistic movements. Being here, in fact, has made me realize how little I know about religion, especially Catholicism.

My early childhood was marked by attendance at a private Episcopalian school and weekly Christian-based Sunday School, so I had a lot of regular exposure to religious education. In 3rd grade, I switched to public school and the same year, our church went bankrupt. Since then I’ve been to only a handful of religious ceremonies, most of which I either didn’t want to be at or didn’t understand.

My abrupt ending of religious education means my knowledge of Christianity is pretty pathetic. I learned who Cain and Abel were in 10th grade, I sometimes can’t tell Jesus apart from St. John the Baptist in paintings (you’d be surprised that it’s not always obvious), and I’ll never fully figure out Easter.

Traveling in Europe makes me envy Catholics, though. There is so much rich history to understand here, but almost all of it is based on a day-to-day pious lifestyle or conflicts between religious sects that I don’t know about. Looking at churches, monasteries, and 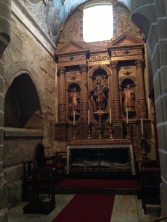 cathedrals from centuries ago helps to narrow the gaps in my religious ignorance, but it only widens my craving for a culture I’m not a part of.

I want to revel in the stories of the saints. I want to pray alongside the Portuguese, knowing that while we don’t have language or location in common, we are united by faith. I want these incredibly captivating places I’m seeing to mean more than just beautiful architecture. I want to feel their spirituality and their intimately personal significance.

But I can’t do those things. At home, I forget about religion because it is so far removed from my daily life. In Lisbon, the Marquis wanted the downtown to be similarly unfocused on Catholicism. Somehow my ignorance of religious history lets me see the principles behind the Marquis’ choice. If someone as impious as I am can enter a church and feel its power and integration with the culture, then the only possible way to separate the people of Lisbon from their faith was to do so physically.

Join 4,001 other followers
My Tweets