Upbeat songs, hilarious references, and unconcealed feminism–what’s not to love?

After experiencing tons of success with High School Musical, Disney decided to put out another movie with an extremely undetailed (yet somehow descriptive) title.

This time we follow two surfer teens who get caught in a storm that transports them to the set of the (fictional) 1960s beach flick “Wet Side Story,” and the two have to figure out how to return home. Self-discovery ensues.

And hilarity ensues. Between an unapologetically narcissistic surfer boy, anachronistic references to technology, and parodies of plot points from Grease, West Side Story, and 60s beach party films, the comedy is clever and endearing.

There’s some cheesiness to the movie, but because it’s clearly intentional satire, it adds a smart sense of humor that adults can enjoy while the kids enjoy the bright colors, catchy songs, and energetic dance numbers (mad props to the dancers, by the way, because they do impressively fast routines WHILE DANCING IN SAND).

I appreciate how the protagonists McKenzie and Brady are together throughout the whole movie, thus removing the temptation to fall into a boy-gets-girl-boy-loses-girl-boy-gets-girl-back routine. But that’s not the only noteworthy element of feminism.

The movie takes advantage of its time travel element to contrast modern gender roles with those of the early 60s, and McKenzie spends much of her time encouraging her new girlfriends to be independent and capable.

While I do have some qualms about McKenzie’s character (she’s often portrayed as bewildered, fun-hating and inflexible, and overly emotional), but in general she’s a good role model for young girls because of her passion, her strong sense of self-sufficiency and independence, and her drive for success.

Teen Beach Movie is also fantastically meta (which, of course, also adds humor). There’s plenty of singing about singing, discussing movies in a movie, and self-awareness about the prevalence of a film formula. 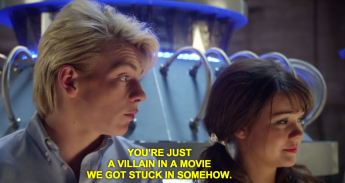 Between Teen Beach Movie’s intelligent humor, fun musical numbers, and focus on discussion of gender roles, it’s definitely a hidden gem in the world of Disney movies. Plus it’s on Netflix, so what are you waiting for?

This post is part of the Beach Party Blogathon hosted by Ruth of Silver Screenings and Kristina of Speakeasy.

Click here or on the graphic to the right for more information on the blogathon, to read other beach party posts, or to join in the fun (there’s still time–the party continues all week!).